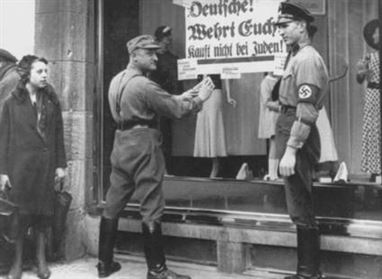 Soon after Hitler came to power in 1933, the first anti-Jewish measures came into force in Germany. Although there were Jews who left for the surrounding countries, many stayed, taking a cautious attitude and assuming that Hitler's government would be of short duration. Many Jews had served in the German army during World War I and felt that, to all intents and purposes, they were German.

With the burning of books written by Jewish writers, the introduction of the Nuremberg racial laws and the relentless hate campaign of the Nazis, it became clear that the situation would not improve for the Jews. After the Anschluss (the annexing of Austria into the Third Reich),The Austrian Jews noticed the effects immediately. Jewish families were marginalised from society and given the cold shoulder in public.

The first large-scale arrests of Jews took place in the aftermath of Kristallnacht (Crystal Night), which took place during the night of 9th and 10th November 1938. Jewish men were arrested and deported to camps such as Sachsenhausen and Dachau. Two months later many of them were released after they had signed statements that they would leave Germany as soon as possible.

Families who could not get away together sent their children to the Netherlands, France or Switzerland on children's transports. The voyage of the St. Louis, the ship in which a large number of German Jews tried to escape in May 1939, made it clear that the German-Jewish refugees could not count on hospitality from anywhere. Despite this, a significant part of the original Jewish community were able to flee from Germany. On 10th May, 1940 there were approximately 30,000 refugees in the Netherlands.