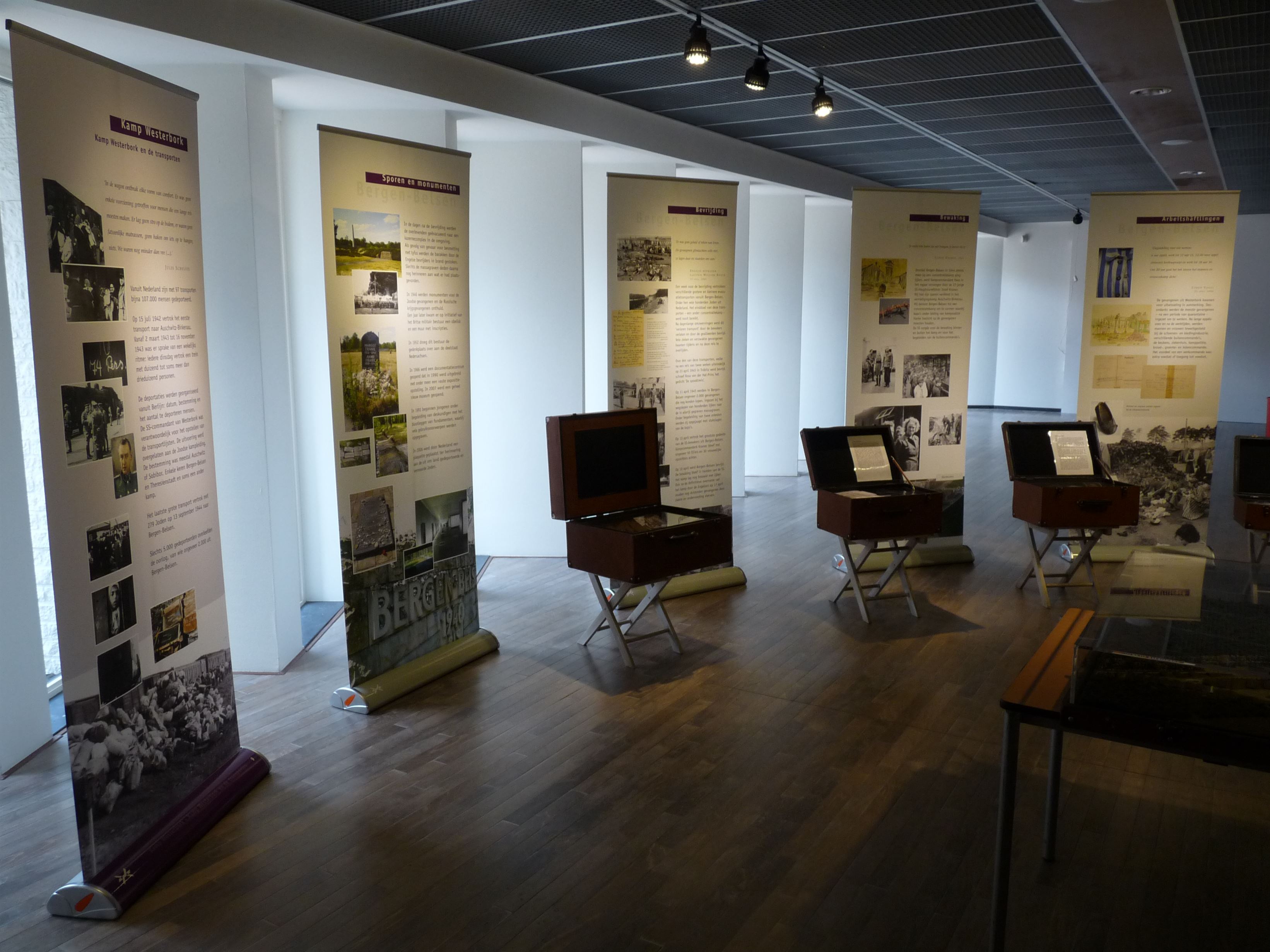 A Suitcase Full of Hope
Almost daily we see images of refugees worldwide, often housed in makeshift camps. Their story is the most recent example of an age-old problem which still exists in our country. For centuries, the Netherlands has been a shelter for people fleeing their own countries because of fear for their lives. Thousands of German Jews came to the Netherlands in the late thirties of the twentieth century. The exhibition ‘A Suitcase Full of Hope’ tells the story of these refugees. There are suitcases full of personal stories of those involved, from refugees to border officials and the director of Refugee Camp Westerbork.
Internment camp Westerbork 1945-1948
This exhibition contains letters that have never been shown before, special personal stories and unique footage of an unknown period in the camp history.
This exhibition tells the story of the other places in the Netherlands that were used for the same function. It illustrates the history of the NSB and the rising hatred of ‘bad’ Dutch people after the internment, especially relating to the children of the detainees.
The exhibition allows the visitor to reflect on the question 'What is politically wrong? ‘

For Safekeeping
The threat of deportation made many people decide to hide their valuables or give them to neighbours or friends or strangers for safekeeping. Along with valuable and expensive items were also photographs and clothing. Not all Dutch people honoured the trust given to them, others fulfilled their duty better. Over 100 000 Jews did not return after the liberation. Objects, books and pictures wait in vain for their owners.

Lachen im Dunkeln
‘Camp Westerbork - a city in itself, a world in itself - was full of contrasts. The greatest contrast was between the extremes of the misery of the transports to the grandiose revues in the camp, for which no effort was spared.’ Behind these words, recorded from the mouth of a former camp inmate, are hidden a world of unreal contradictions. Inside the fence of barbed wire, in sight of the towers and the horrors of the weekly transports, was to be found perhaps the best comedy of the Netherlands in wartime. The musical performances were of high quality and the sport contest were sometimes more than worth looking at. The German exhibition Lachen im Dunkeln gives a mixed picture of this world of opposites.

Auschwitz
The exposition 'Auschwitz' tells the story of the nazi camp, the symbol for the destruction of Jews in nazi-occupied Europe, and its survivors. The complex consisted of a former Polish barrack, Auschwitz I; a barracks camp, Auschwitz-Birkenau II; and dozens of neighbouring camps. The camp developed into the largest complex of concentration and extermination camps. Since 15 July 1942, 66 trains with thousands of Jews have departed from Camp Westerbork alone.

Sobibor
The Sobibor exhibition tells the story of that camp. Unlike Auschwitz-Birkenau, Sobibor was only an extermination camp. Jews who were not immediately gassed were those employed in the murder process. All in 1943, nineteen trains departed from Westerbork to Sobibor. On arrival the Jews were driven to the gas-chambers with sticks, batons and whips. As at Auschwitz, the gas chambers were disguised as shower-blocks.

Bergen-Belsen
The Bergen-Belsen exhibition tells that camp’s story. Of all the camps, the chances of survival in Bergen-Belsen were the greatest. Bergen-Belsen, on the Lüneburgerheide, was built in 1935 and designed as barracks for workers. Although conditions were bad in Bergen-Belsen, there was a lot of harassment however. The camp was famous for people spending hours standing at one place behind barbed wire without food and drink. One advantage was that although families lived separately, they could see each other for about an hour each day. In the camp there was a strict hierarchy: the SS was the boss and they let the Jews organise themselves.